Quantum networking
& computing
Solve the unsolvable, with quantum converters.
Request a demo
Enabling the true potential of quantum computing,
by providing the last missing link to scale up.
In 1943, IBM’s chairman Thomas J. Watson said “I think there is a world market for maybe five computers”. Few years later in 1949 the magazine Popular Mechanics, forecasting the relentless march of science, predicted that computers in the future may weigh no more than 1.5 tons*. Since then, in just over 70 years, the computer revolution has changed our world.
*The actual quotation, from the March 1949 issue of Popular Mechanics, goes like this:"Where a calculator like ENIAC today is equipped with 18,000 vacuum tubes and weighs 30 tons, computers in the future may have only 1000 vacuum tubes and perhaps weigh only 1½ tons." 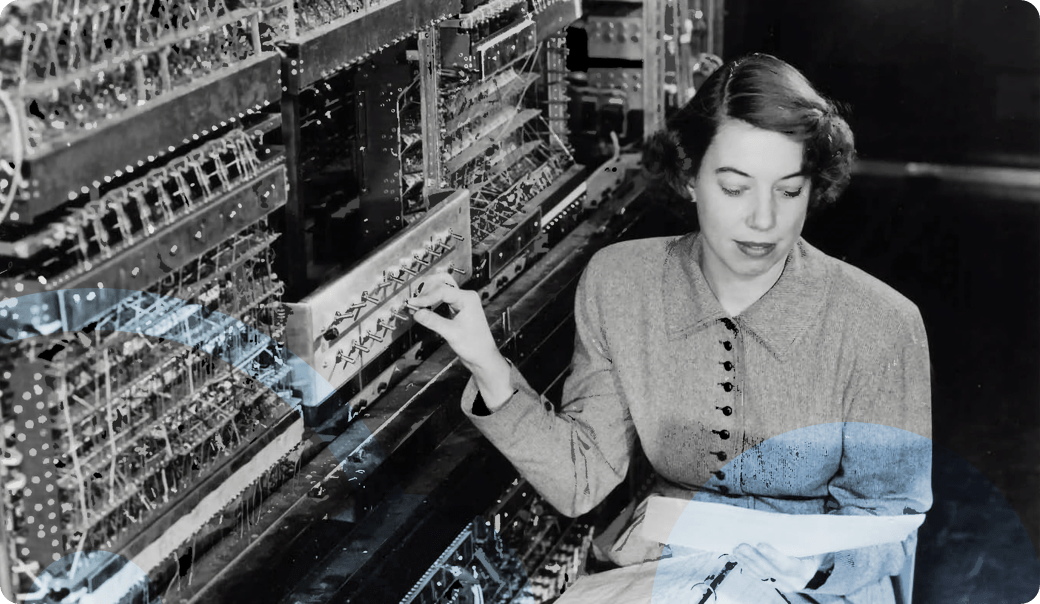 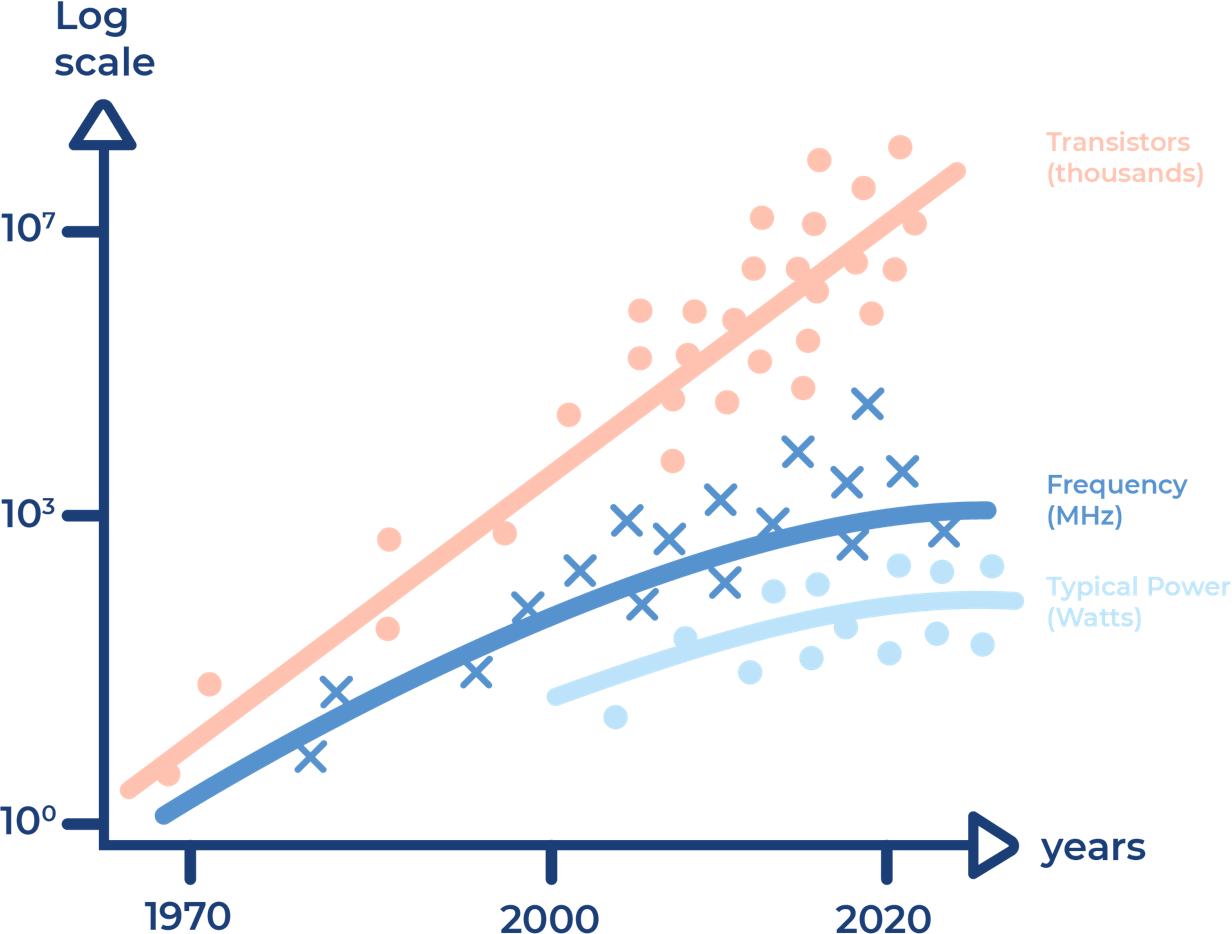 Today computers face fundamental problems. Moore's law, the principle that has powered the information-technology revolution since the 1960s, is nearing its end: circuit features are as small as a few atoms. Things get too small. Chips get too hot.
‍
Thus with current technology, it will cost a billion dollars and will require a nuclear power plant to run a 10 times more powerful computer than the current most powerful supercomputer on the planet.
There is another path. Quantum mechanical computers as proposed by R. P. Feynman and others in the late 1980s.
‍
Quantum computers will solve certain types of complex problems that are intractable for conventional computers today but of critical importance for society, such as drug & vaccine discovery, climate change and artificial intelligence. Big data and artificial intelligence need a hardware revolution to make computing more sustainable. 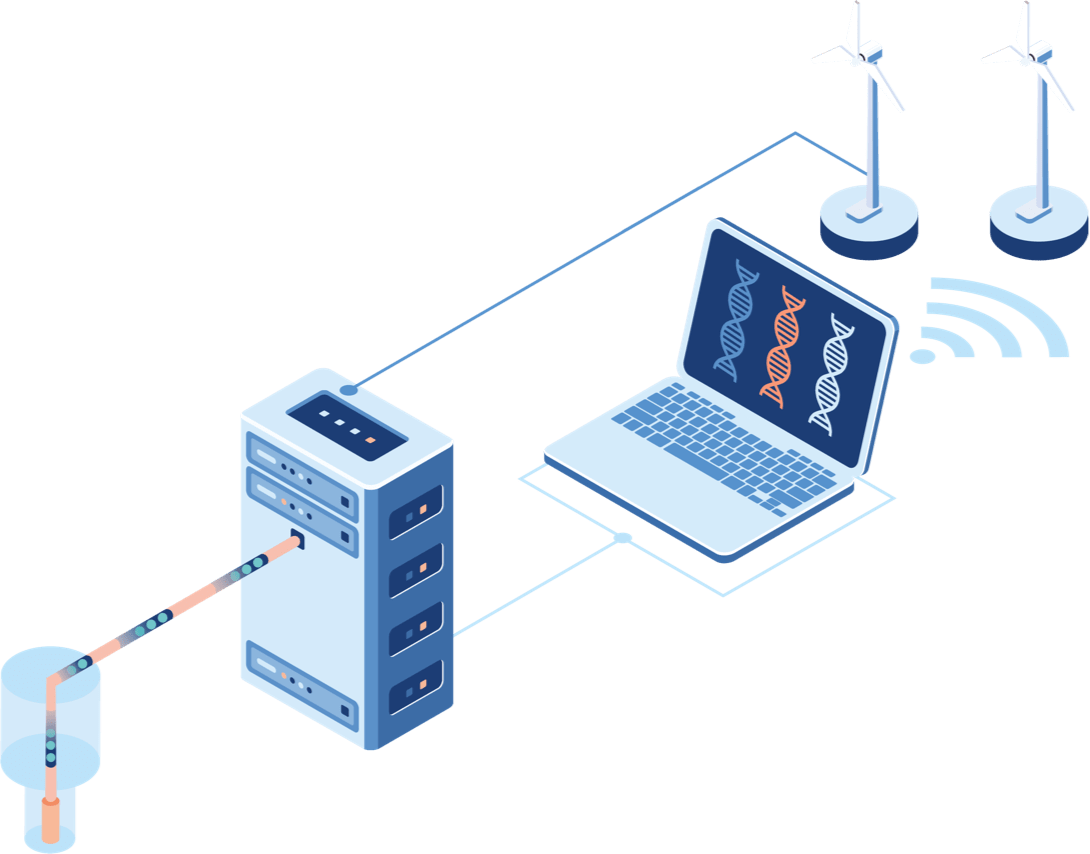 The quantum race is on, and the stakes are high.
The winners will gain an intelligence edge, as well as a first-mover advantage in what is guaranteed to be a massive industry for decades to come.
Though, today’s first quantum computers are limited to noisy and intermediate scales.
The DiVincenzo criteria* are conditions necessary for constructing a quantum computer.
One of them remains unsolved: the ability to interconvert stationary and mobile (or flying) qubits, (i.e. building a ‘quantum link’. It represents the key to unlock the full potential of the new quantum-computing paradigm.
‍
One of the key focus of the Miraex team is to build the hardware that solves the challenge of connecting different quantum devices, enabling the realization of a quantum internet (or cloud) - a distributed network of quantum computers connected via secure optical communication channels. Almost a decade of research enabled Miraex to come up with a solution, and we have successfully proved the concept.
* Fortschritte der Physik, 48 771–783 (2000). 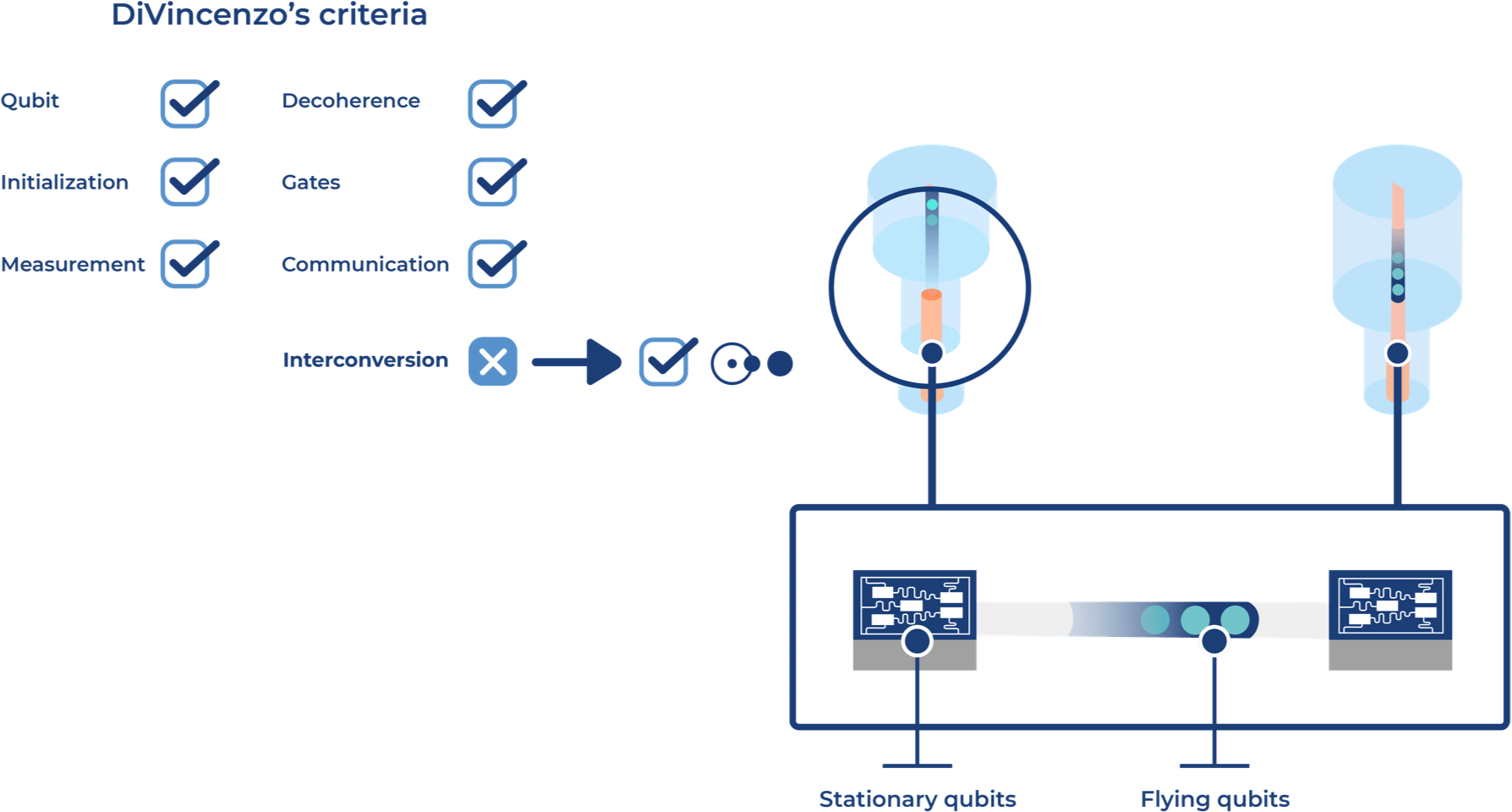 The energies of stationary (microwave photons) and flying (near IR optical photons) qubits differ by five orders of magnitude*, but Miraex technology can bridge this gap.
*This implies that stationary qubits must be kept at low temperatures (<1K) and are impossible to connect via ambient temperature wires; the qubits would be destroyed. The majority of the chip housing is dedicated to cooling and regulation. Cooling down to almost one degree above absolute zero and taking the data out is quite significant work to go around this. 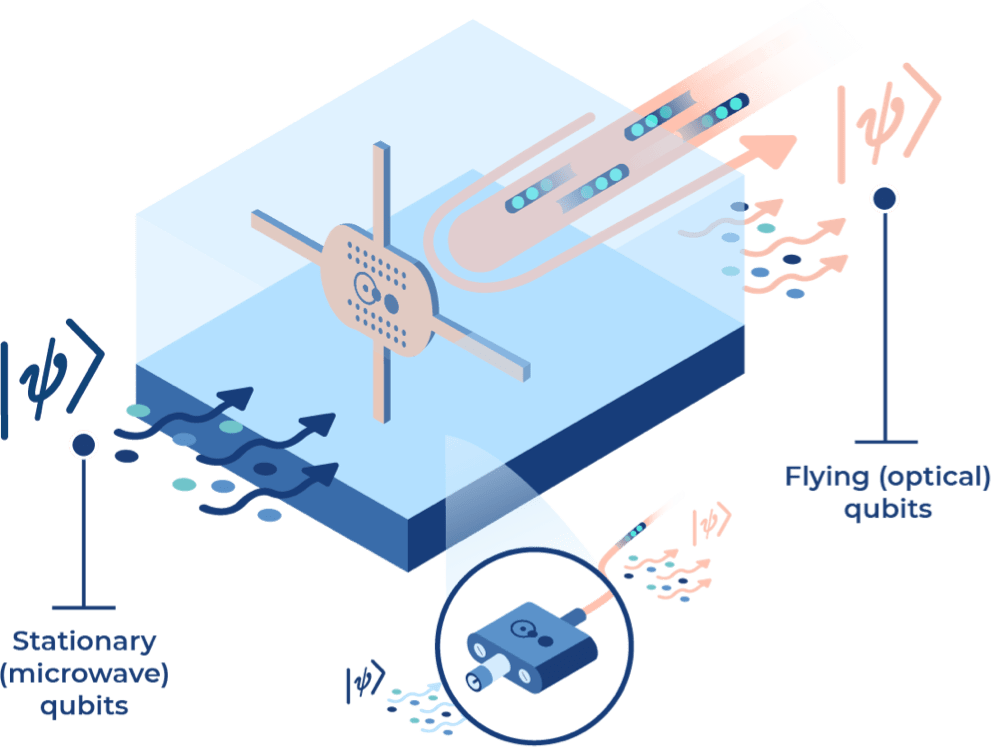 Even in the case of a quantum computer device with a small number of qubits, two clustered quantum computers can provide an exponential speedup with respect to isolated ones. This opens the door to future implementations of large-scale quantum computers. The solution that Miraex is focusing on is converting quantum states between microwave and optical photons.
‍
This will enable the transfer of quantum information over long distances between superconducting chips, using classical optical telecom fibers*, and thus the scalability of quantum networks. Miraex technology will have a tremendous impact on the growth of quantum computing platforms by wiring-up quantum machines directly together and for instance speeding-up the scalability of quantum cloud solutions. We are paving the way to the era of new quantum technologies.
learn more
The Quantum Internet (even within short distances) may provide an exponential scale-up of the quantum computing power through the distributed computing paradigm.
Specifically, by interconnecting isolated quantum devices via a communication network and by adopting a distributed approach, a virtual quantum processor is built up and it is constituted by a number of qubits that scales exponentially with just a linear amount of physical resources, i.e., the number of interconnected devices.
‍
Hence, if we consider two isolated N-qubit devices (e.g N=10), they can represent ~2N (e.g. ~210) states each, thanks to the superposition principle, for a total of ~2x210=~2N+1 (e.g. ~2x210=211) states at once. But if we interconnect these two devices with a quantum network, the resulting cluster can represent up to ~22xN (e.g. 220) states, with an exponential increase of the associated state space dimensionality.‍
Interconnecting M devices of N qubits with a quantum network,
the resulting cluster can represent up to 2MXN states.
Key to the exponential scaling of computational power.

Miraex provides the last missing link for the computing industry to scale up; to go beyond the small quantum computers available today, towards commercial advantages of quantum computing. To the millions of qubits needed for universal fault-tolerant machines that will solve the world’s most difficult problems. For more sustainable computing.
‍
Quantum computers have a huge advantage in terms of energy consumption, with an estimated ratio of 1 to 1 million in consumption difference. A quantum computer consumes in the range of few 10 kW and its equivalent classical supercomputer, in the range of 10 MW, and the calculation time ratio is ~10 min vs ~10 days. This makes a significant difference!
Current High Performance
Computers 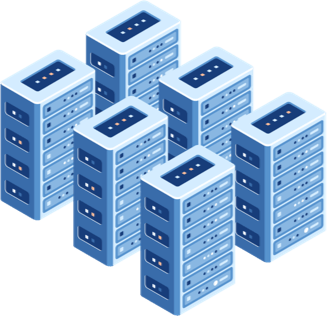 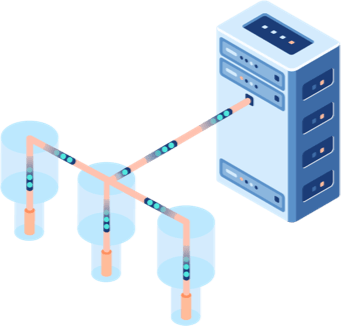